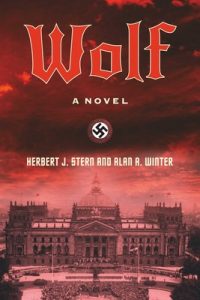 How did Adolph Hitler rise to power?  How could the German people fall for his rhetoric and hate speech?  Wolf tells the story of Hitler’s rise to power through the eyes of his friend Friedrich Richard.

Friedrich Richard awakens in a hospital at the end of WWI with no memory of what came before this point in time.  He had no ID on him when he was wounded and he had plastic surgery after his massive head wound.  No one knows what he originally looked like.  He is given a name and is sent to a hospital to try to recover his memory.  While there he meets his bunkmate Adolph Hitler who was blinded by a gas attack.  While at the hospital, Hitler is treated by a psychiatrist as his blindness does not have a physical cause.  The two strike-up a friendship and Richard’s physical strength allows him to be a “fixer” to Hitler as he begins his political career.

Richard likes Hitler’s message of German power and anger at the forced payments the country has to make in reparations after WWI.  He does not like and overlooks Hitler’s racist messages.  Richard has a Jewish friend.  He himself is not racist, so what is the problem if he supports someone who is?

Richard is often away from Hitler and is only usually called back when there are problems which mainly have to do with Hitler’s womanizing.  Indeed, at various points in the book, I felt like all I was reading about were Richard and Hitler’s conquests.  Richard discovers that he is a virtuoso piano player and learns to entertain crowds.  He also ends up composing music for movies.  I was intrigued by this and the early film industry.

The beginning scene of the book is riveting and action packed and it is tied up at the end.  I enjoyed the story, although I thought Hitler was a side character in a story about his rise to power.  It was an interesting take on someone realizing that even though they can be a personal friend with someone, power and hate can turn them into someone they no longer understand.

“Life is not as simple as you’re making it to be Lillian.  It is not always black or white.  There is plenty of grey.  It’s true that our party is far from perfect, but they are our only chance to restore our greatness.”

Book Source:  Review Copy as part of the TLC Book Tour.  For more stops on this tour, check out this link.

In the Great Tradition of Herman Wouk, Author of Winds of War and War and Remembrance, Wolf is a Thoroughly Researched and Illustrated Historical Novel about a Man who is Not Yet a Monster . . . but Will Soon Become the Ultimate One: Adolf Hitler.
Perhaps no man on Earth is more controversial, more hated, or more studied than Adolf Hitler. His exploits and every move are well-documented, from the time he first became chancellor and then dictator of Germany to starting World War II to the systematic killing of millions of Jews. But how did he achieve power, and what was the makeup of the mind of a man who would deliberately inflict unimaginable horrors on millions of people?

Meet Friedrich Richard, an amnesiac soldier who, in 1918, encounters Hitler in the mental ward at Pasewalk Hospital. Hitler, then a corporal, diagnosed as a psychopath and helpless, suffering from hysterical blindness, introduces himself as Wolf to Friedrich and becomes dependent upon Friedrich for assistance, forming an unbreakable bond between the two men.

Follow Friedich—our protagonist—who interacts with real people, places, and events, through the fifteen-year friendship that witnesses Hitler turn from a quiet painter into a megalomaniacal dictator. Using brand-new historical research to construct a realistic portrait of the evolving Hitler, Wolf will satisfy, by turns, history buffs and fiction fans alike. And as this complex story is masterfully presented, it answers the question of how a nondescript man became the world’s greatest monster. .

Herbert J. Stern, formerly US attorney for the District of New Jersey, who prosecuted the mayors of Newark, Jersey City and Atlantic City, and served as judge of the US District Court for the District of New Jersey, is a trial lawyer. He also served as judge of the United States Court for Berlin. There he presided over a hijacking trial in the occupied American Sector of West Berlin. His book about the case, Judgment in Berlin, won the 1974 Freedom Foundation Award and became a film starring Martin Sheen and Sean Penn. He also wrote Diary of a DA: The True Story of the Prosecutor Who Took on the Mob, Fought Corruption, and Won, as well as the multi-volume legal work Trying Cases to Win.


About Alan A. Winters

Alan A. Winter is the author of four novels, including Island Bluffs, Snowflakes in the Sahara, Someone Else’s Son, and Savior’s Day, which Kirkus selected as a Best Book of 2013. Winter graduated from Rutgers University with a degree in history and has professional degrees from both New York University and Columbia, where he was an associate professor for many years. He edited an award-winning journal and has published more than twenty professional articles. Alan studied creative writing at Columbia’s Graduate School of General Studies. His screenplay, Polly, received honorable mention in the Austin Film Festival, and became the basis for Island Bluffs.
Posted by Laura's Reviews at 10:30:00 PM