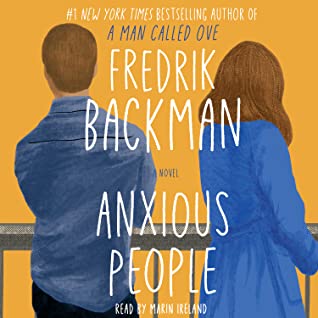 Anxious People is one of my favorite books yet this year.  It’s a beautifully crafted novel with a unique storyline.  It’s a great character study into a motley crew of people.

The basic premise is that Anxious People is a closed room mystery.  A bank robber tried to rob a “cashless” bank and fled from the scene of the crime to an apartment building across the street.  The bank robber ended up in a viewing for an apartment for sale and suddenly the six attendees and the real estate agent have become hostages.  Or as the bank robber often says, they become, “the worst hostages ever.”  Jim and Jack are a father and son police team in this small city in Sweden and work to help the hostages.  When the bank robber disappears after the hostages are freed, they work together to solve the mystery.  Where could the bank robber have gone?

Anxious People is a mystery, it’s laugh out loud funny at times, and it’s also sad.  It really looks at what it means to be human.  What it is to love and how we are all working toward trying to keep things together in our worlds.  It also looks at the impact of one man’s suicide from a bridge ten years ago on the community.  It’s a great character study into the hostages, police officers, and the bank robber.  I loved how well written the story was.  Just when you thought you knew a character; Backman would turn the table on you, and they were nothing like you assumed.  It was a great look into how you shouldn’t make assumptions about people.   It was a very unique story and very enjoyable.

Marin Ireland is an excellent narrator.  She had a different distinct voice for each character, which I greatly enjoyed.

“They say that a person’s personality is the sum of their experiences. But that isn’t true, at least not entirely, because if our past was all that defined us, we’d never be able to put up with ourselves. We need to be allowed to convince ourselves that we’re more than the mistakes we made yesterday. That we are all of our next choices, too, all of our tomorrows.”

“That's the power of literature, you know, it can act like little love letters between two people who can only explain their feelings by pointing at other people's.”

“Some of us never manage to get the chaos under control, so our lives simply carry on, the world spinning through space at two million miles an hour while we bounce about on its surface like so many lost socks.”

“Nothing is easier for people who never do anything themselves than to criticize someone who actually makes an effort.”

Overall, Anxious People is one of the best books I’ve read this year.  It is a great look into what it means to be human.