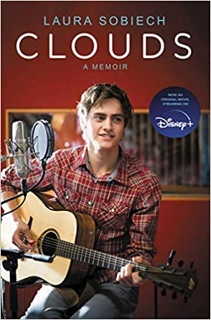 Have you ever read a book that has deeply touched you?  Clouds is a memoir by Laura Sobiech about the battle her son, Zach, fought with cancer.  I’ll say it right here, I don’t think I’ve cried this much reading a book for a long time.  It was a beautiful story of a young life lost too soon and a young man living life to the fullest while he can.  The impact he had on so many people by remaining positive was very touching.

Zach Sobiech found out he had osteosarcoma right after he started high school.  He fought the disease through treatments, and he seemed to have beat the disease.  Then when he was 17, he found out it was back, and he only had limited time left.  His mother, Laura, details his journey in this beautifully written memoir.  Zach chose to make the most of his time left – to spend it with those he loved and to write and share beautiful music.  Even after his passing, people kept coming up to his parents at his funeral to discuss how he had touched their lives through his songs or his small acts of kindness.

I loved that Laura Sobiech was real with her writing.  She wrote about cancer and the impacts it had on their entire family, including her marriage, and how they worked through it.  She was candid on the very tough decisions that had to be made, that I can’t imagine having to make as a parent.  I’m tearing up just writing this.  I loved the honesty.  I also loved how faith played a big role in their family.  I related so much to this family.  They are Catholic like my own family and live near the Twin Cities in Minnesota.  My husband is originally from that area and we live in Wisconsin now.  Her kids went to Catholic school through eighth grades as mine do as well.  She even took Zach to a Mom’s Club to get to know other moms, just as I did.  This book was so relatable, which made it even more devasting to learn what the family had to go through.  I loved that even though Zach had limited time on this earth, he wanted to spend as much of it as he could with his family and friends.  I love that he was able to record his songs and make a difference by raising awareness about osteosarcoma. I had never heard of this type of cancer before reading this memoir.

This novel had a giant Disney Plus emblem on the cover, so I looked up the trailer for this movie.  It looks excellent.  My daughter keeps singing the song.  We will be watching it next week.

Favorite Quotes (I had a lot -this is narrowed down!!):

“Denial is a crazy thing.  Sometimes it hinders people from seeing what is real and keeps them in a place they should not be, but sometimes it’s the only thing that allows people to live freely in this midst of terrifying circumstances that would otherwise cripple them.”

“But I know the people who have taught me the most about what it means to live a faith-filled life are those who live it and then wait for people to ask how.”

“We thanked the dried and dusty bones for their morbid reminder.  But for now, we would shake the dust off our shoes and leave the dead where they lay.  Our time hadn’t come yet, so we would fill it with the wonder of life that awaited us.”

“It was his understanding that to suffer patiently and with hope was to be a channel of grace, and to serve others in the midst of it all was a more effective example of faith than any number of words, no matter how true or profound.”

“He was a boy who understood that although the door to eternity was close at hand, he already lived in the kingdom of God.”

“We changed, and people across the globe changed, because of Zach . . . It was because he gave us the little things:  a smile, a kind word, and some songs.  Above all, he gave us the most precious thing he had – himself.”

“You don’t have to find out your dying to start living.”

Overall, Clouds is an inspiring, uplifting, and heartbreaking memoir.  I highly recommend it.

Book Source:  Review copy from Thomas Nelson for being a part of the TLC Book Tour.  Thank-you!  For more stops on this tour, check out this link.


Originally published as Fly a Little Higher and now updated and revised to coincide with the film release of Clouds, Laura Sobiech tells the amazing, true story behind the song and the movie.

“Okay, Lord, you can have him. But if he must die, I want it to be for something big. I want someone’s life to be changed forever.” This is what Laura Sobeich prayed when she found out her seventeen-year-old son had only one year to live. With this desperate prayer, she released her son to God’s will.

At that point, Zach Sobiech was just another teenager battling cancer. When his mother told him to think about writing goodbye letters to family and friends, he decided instead to write songs. One of them, “Clouds,” captured hearts and changed lives, making him an international sensation.

This story is a testament to what can happen when you live as if each day might be your last. It’s a story about the human spirit. It shows how God used a dying boy from a small town in Minnesota to touch the hearts of millions—including top executives in the entertainment industry, major music artists, news anchors, talk show hosts, actors, priests and pastors, and schoolchildren across the globe. And above all, it’s an example of the amazing things that happen when someone shares the most precious thing he has—himself.

“I’m not a musician; I’m just a filmmaker, and my prayer is that you get an opportunity—both through the reading of this beautiful book and the watching of our film based on it—to experience what I will fail to put into words: the magic and inspiration of Zachary David Sobiech.”

Learn more about Laura, Zach and the book at flyalittlehigher.com. #flyhigher