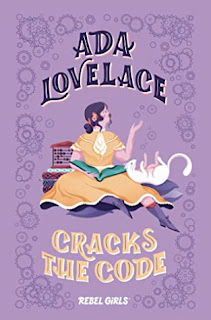 Penelope and I are continuing our reading of the Rebel Girls series by learning about Ada Lovelace.  Penelope loves math so she thought it was fascinating that young Ada Lovelace loved math as well and had great ideas for inventions.  As an adult, Ada put together what was later realized to be the first computer program and was able to imagine what the future would hold for computing.

I had never heard of Ada Lovelace until a few years ago when I read The Innovators by Walter Isaacson.  Penelope loved the pictures in this book and the tales of Ada as a child, but she was not as captivated about Ada’s life as an adult as she was by Madame CJ Walker.  I think she did not really understand the work that Ada was doing with Charles Babbage on figuring out the mathematics and reasoning on how his machine worked.  Penelope also does not know who Lord Byron is, so the fact that Ada was his daughter went right over her head.  I explained how he was a famous poet, but ten-year-old Penelope did not really care about that.

Overall, Ada Lovelace Cracks the Code is a good book to learn about this early mathematics and computer pioneer.  I was amazed by her vision.  It was great to read a book about a female mathematician.