The House on the Cliff (Hardy Boys #2) by Franklin W. Dixon 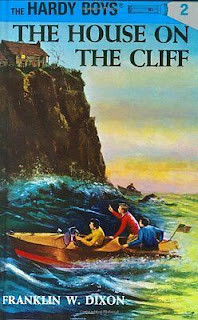 What is your favorite book about smugglers?  Mine is Jamaica Inn by Daphne Du Maurier.

The House on the Cliff, which is the second book in the Hardy Boys series, is a thrilling adventure and mystery involving smugglers.  The Hardy Boys and their crew of friends try out their new telescope and notice some strange happenings both at sea and at the house on the cliff.  After their father disappears investigating a smuggling ring, they are on the case to determine what has happened to him.  Is the house on the cliff haunted or is there more than meets the eye?

It has been hard to get Daniel to read with me lately as he’s obsessively reading through the Harry Potter books on his own lately.  As a twelve-year-old, he feels the Hardy Boys books are formulaic, but he likes the mystery and how most chapters end with a cliff hanger.  They are entertaining books.  I think for this one we both in particular really liked the underground tunnels and Daniel really liked the speed boat. At times we had to remind ourselves that this book came out in 1927 and that is why things were the way they were.

Overall, The House on the Cliff is a good clean entertaining mystery for both kids and adults.
Posted by Laura's Reviews at 5:58:00 PM