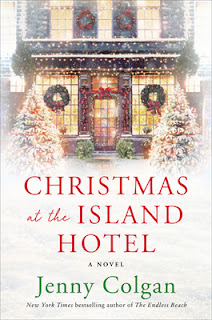 I love Jenny Colgan’s books.  She writes vivid characters and I greatly enjoy their stories.  Christmas at the Island Hotel is the fourth in this series set on Mure.  Mure is a tiny island halfway between Scotland and Norway.  Over the course of the four books, I’ve felt like I’ve gotten to know and love all of the characters on this small island.  It was like a Christmas gift to be able to take a glimpse into their lives again.

Fintan’s beloved husband left him a beautiful hotel on the island to run, but Fintan is having a hard time working through his grief to get the hotel up and running.  Luckily his sister Flora is helping him out with it all but is also secretly worried as she has a brand-new baby but feels like she wants to keep working. Shouldn’t a new mother only want to spend time with her baby?  The pressure is also on at the hotel after it is listed online as one of the world’s worst hotels.  Dr. Saif is a Syrian refugee working on the island.  He is still searching for his lost wife and feeling guilty that he is thinking about moving on with another woman.  Isla has worked for Flora at her bakery in the past and is now working for the new French chef at the Island hotel.  She finds herself attracted to the new kitchen helper, Konstantin.  Little does she know that Konstantin is a Norwegian royal who has been kicked out by his father to learn how to actually work for a living.  Konstantin has lived a pampered life and realizes that he doesn’t have any skills for how to live.  Will Isla learn Konstantin’s true identity?  Will the hotel get a successful start?  Will the island finally have Christmas lights?

I loved this book and finished it quickly.  You could probably read this as a standalone book, but I would recommend reading the first three books in the series first.  You would understand a lot more of the background of the cast of characters. I love that I know I will get a mostly happy ending with Colgan’s books, but that I will love the journey along the way.  The characters are also my favorite thing about the books – I just love them.  I really hope that Colgan writes a book a book five in this series.  I enjoyed that my old favorite characters were in this book, but that Isla and Konstantin were added in for new characters and storyline.  I enjoyed it!  I also love how Colgan is able to write a book that has both hetereosexual and homosexual characters with convincing love stories, and also include a Syrian refugee storyline.  The romance is fun, but clean.

“On the empty road, as the angel faded behind him, he had never felt lonelier in his entire life, like the only man in a world that had turned very, very cold toward him.”

Overall, Christmas the Island Hotel is an enjoyable trip to Mure to visit favorite characters just in time for Christmas.  It was a great book!