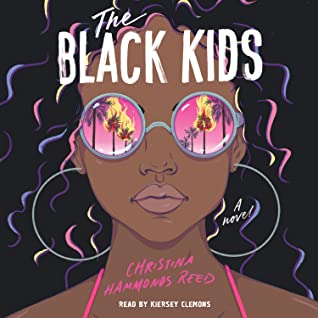 Where were you during the 1992 Rodney King riots in Los Angeles?  The Black Kids is a coming of age novel set with the backdrop of the riots happening in LA.  Ashley Bennett is a wealthy African American teenager that is the only black kid in her premier group of friends at school.  After the riots happen, Ashley starts to notice the subtle and not so subtle racist things her friends say.  She thought she was one of them, but is she?  Will Ashley figure out who her real friends are?

I thought Ashley’s journey and coming of age was interesting. I liked her growing awareness of herself, her family, her history, and how other kids at school were treated. I liked the discussion of how Ashley is asked to represent her entire race to her all white group of friends, and how tiring that could be. This book takes place in 1992 during the end of my 8th grade year.  I loved the cultural references in the book – they were a lot of fun.  I liked the other characters in the book such as her sister, Jo, and wish we had more time with her rather than Ashley’s awful friends.

I did have a hard time connecting to Ashley as a character.  I think it was because she came from a very wealthy family and came off as very spoiled in her stream of conscious narration.  I like that she did become more self-aware throughout the course of the book and came to terms with herself as a black woman in America. I also suffered from the same problem I’ve had with other books.  It was advertised as the next The Hate U Give, a book I loved.  This is nothing like The Hate U Give so I came in with incorrect expectations for the book.

I did enjoy listening to this as an audiobook, particularly because it was a stream of conscious narration.  Kiersey Clemons was Ashley to me.

“Sometimes being different means hiding pieces of yourself away so other people's mean can't find them.”

“You can't tell people to pull up on bootstraps when half of them never had any boots to begin with, never even had the chance to get them.”

Overall, The Black Kids was an interesting coming of age novel set with the Rodney King riots in the background.