The End of Normal by Stephanie Madoff Mack (audiobook) 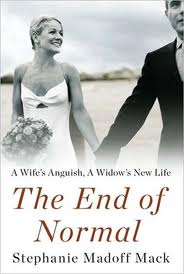 The End of Normal is a riveting look into the downward spiral of the Madoff family. Stephanie Madoff Mack is the widow of Mark Madoff, Bernie Madoff’s eldest son that committed suicide two years after the Madoff scandal broke.


The End of Normal details Stephanie’s first meeting with Mark, their dating life, and fairy tale marriage. Stephanie and Mark had a wonderful life with each other and a deep love that only seemed to be threatened by control issues with Mark’s ex-wife. Although Mark came from the uber-rich Madoff family, he made his own wealth by running a successful enterprise in his father’s firm. Mark and Stephanie had a wonderful daughter and were expecting a new son when their world came crashing down.

Mark and his brother Andy sat down with their father to discuss some irregularities at work only to receive a bombshell from their father; he was running a Ponzi scheme and was trying to get rid of the last millions to family and friends before he would be discovered. Mark and Andy left enraged and Mark turned his father in to the authorities later that day.

Although Mark and Andy had nothing to do with Bernie’s Ponzi scheme and had in fact turned him over to the authorities, having the Madoff name became a curse rather than a blessing. Hounded by the press and lawyers, Mark and Stephanie’s marriage started to falter. Mark was also the most hurt by his mother who chose to stay by Bernie’s side at the expense of her sons’ feelings. With their marriage on the mend, Stephanie and her four-year old daughter are at Disney World when the unthinkable happened.

The End of Normal was a fascinating book to listen to at times, but also a very hard book to listen to at other times. Stephanie Madoff Mack read her own work in the audiobook, which gave it the personal touch, but also made it hard to listen to during emotional events. One could hear the crack in Mack’s voice like she was doing all she could to keep it under control. I give her much credit for reading her own memoir for the audiobook version as it must have been fraught with emotional landmines.  I had a hard time stopping this book as I wanted to keep listening to it all of the way through!

The End of Normal gave me a new view of the Madoff scandal. I read Tangled Webs earlier this year, which gave me the clinical view of what went wrong, but this gave me more of the emotional view of how Bernie Madoff’s crimes tore apart his own family, ultimately resulting in his son’s suicide. It also disturbed me how in our society today, a person can be literally hounded to their death. I think Mark Madoff thought he would be helping his family by his death in hopes that the lawsuits would stop, but they only went on to his children.

I just can’t understand how Bernie Madoff could swindle not only the entire world, but his family as well. What did he think would happen to his own family when his crimes would eventually come to light? It makes one wonder if he had any soul at all.

On a side note, I just listened to Silver Girl by Elin Hilderbrand last month and I’m amazed at how much of that novel actually followed the real life circumstances of the Madoff family. It almost makes me want to read it again!

The only negative I had with The End of Normal is that Mack tried to write about how they were a normal family and not living the jet set life of Bernie and Ruth Madoff. While this worked on some level, it had the major effect that it made me believe she didn’t realize how the other 99% lives. Most people do not have three homes and a nanny, especially after losing your job. I think this comes from living an upper middle class life in New York City for her entire life.

Overall, The End of Normal is a captivating personal account of how the Bernie Madoff scandal affected his son’s family. It really made me think about the witch hunt mentality of our society and how that can extend to innocent bystanders.

The End of Normal is my thirteenth item for The Audiobook Challenge 2011.