The Rose Garden by Susanna Kearsley 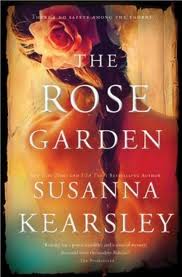 Eva Ward’s famous actress sister, Katrina, has just died tragically young. Returning to a place they both loved as children, Eva brings Katrina’s ashes to Trelowarth House in the small town of Polgelly in Cornwall, Great Britain. Katrina’s former teenage boyfriend and their family friend, Mark Hallett now owns the family estate and is trying to keep it and its beautiful rose garden solvent.


Eva fights off her depression over Katrina’s death by trying to help Mark and his sister Susan advertise Trelowarth and start a new tea shop that will cater to tourists. An old childhood friend named Oliver has popped back in the scene and is a very attractive man. One day Eva “slips” into another time. She is still at Trelowarth, but it is Trelowarth of the early eighteenth century. At that point, two brothers, Jack and Daniel Butler together with their Irish comrade Fergal live at Trelowarth. They are smugglers and about to get involved in an ill-fated upraising to restore James Stuart to the thrown of England. Eva is unable to control when she slips back and forth between the two time periods, but finds herself falling more and more in love with Daniel Butler. Will Eva be able to find happiness between the two worlds? And will the Butler brothers escape their fate?

I enjoyed this novel. I am a big fan of time travel novels. It always fascinates me on the method of time travel. In this novel, Eva fades away or slips through time only while at Trelowarth at unexpected times. I liked all of the secondary characters too and the setting was described beautifully and vividly. The love story between Eva and Daniel was also very romantic as was the story of love between Mark’s father George, and stepmother Claire.

I liked the ending. There were a couple of surprises that I didn’t catch on to as I read the book that really made it the kind of book I couldn’t put down at the end. I really wanted to see where it was going!

Susanna Kearsley has been compared to Diana Gabaldon, Daphne Du Maurier, and Mary Stewart. These are three of my favorite authors so this naturally intrigued me. With the Cornwall setting I felt shades of Du Maurier and the time slip and subsequent love affair reminded me of Gabaldon. I will be blunt though that while I really enjoyed this book, I didn’t think it was as good as a Gabaldon or Du Maurier novel. It was missing the detail and spark that puts both of those authors on a higher level than most. With that being said, I still thought this novel was wonderful and the next best thing to a new Gabaldon or Du Maurier novel. I will definitely be reading Kearsley’s other novel, The Winter Garden.

I long to visit Cornwall someday. After reading the magnificent novels of Daphne Du Maurier and now Susanna Kearsley, it sounds like a beautiful and unique place. I also want to taste a real Cornish pasty. I lived for six years in the Upper Peninsula (U.P.) of Michigan while obtaining my bachelors and masters degrees at Michigan Technological University. While there I learned the fascinating history of copper mining in the area. Expert miners came from the tin mines of Cornwall. The Cornish left their mark on the area, with the greatest mark of all being the pasty which is now a regional treat. It is basically a meat and potato pie that the men would heat up by holding their shovels over a candle for lunch while in the mines. I cook mine in the oven, but it is a favorite meal in the Gerold household.

Overall, The Rose Garden was a wonderfully imaginative tale with true love, time travel, and a fascinating setting.