The Help by Kathryn Stockett (audiobook) 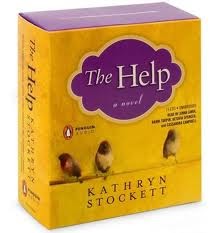 I read The Help two years ago and loved it. It was one of my top ten reads for 2009. I was excited when my FLICKS Book and Movie Club picked this book for our December read. It was good to revisit a book I loved; although this time I decided to revisit it in a new format, audiobook. I had read several reviews that stated that this was an audiobook not to be missed.


It was a riveting audiobook. Read by Jenna Lamia, Bahni Turpin, Octavia Spencer, and Cassandra Campbell; each of the main characters (Skeeter, Minnie, and Aibileen) has their own distinctive voice and personality. I found myself listening to the audiobook everywhere I could to find out how the story would end. Listening to the audiobook seemed like listening to my favorite characters tell the story in their own words. I loved it. My only complaint was that the ending seemed rather abrupt, more so than when I read the novel. I was ready to listen to even more of the story!

My original review of the novel is located at this link. For a quick summary of the plot, this book takes place in racially charged Jackson, Mississippi during the early 1960’s. Aibileen is an African American woman that works for a young family and takes care of their daughter. She is troubled by the lack of love that Elizabeth displays towards her daughter, and also about the racially charged death of her own son. She gets to know one of Elizabeth’s friends, Skeeter, and together they work towards changing their world. Skeeter is a young white woman who is dissatisfied by her current life and expectations for a female during this era. She does not like how her friend Hilly treats the African American servants and wonders why the woman that raised her, Constantine disappeared right before she graduated from college. Aibileen and Skeeter start to work with different maids to put together their stories anonymously on what life is like as a maid in the segregated South. One of these maids is Minnie. Minnie tells it the way it is, which does not make her a popular maid, although her famous cooking skills make up for it. She tries to raise her kids and deal with an abusive husband, while also trying to keep a job.

The Help is a novel that adapts particularly well to the audiobook format. It is my twelfth audiobook for The Audiobook Challenge 2011 – I have made my goal for the year!

I have yet to see the movie The Help and will probably watch it whenever I can get a copy of the DVD from the library. Have any of you seen the movie? What did you think?