Star Wars: Queen of the Empire (#5) by Paul Davids and Hollace Davids 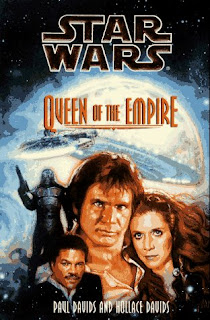 My ten year old son Kile and I are continuing to read this Star Wars series written for children.  It was written in the 90’s so it is no longer canon, but Kile doesn’t care.  We are both enjoying the adventure story and the pictures.

In Queen of the Empire, Han proposes to Leia and Lando convinces them to get married on Fun World.  Unfortunately Zorba the Hutt also decides to visit Fun World at the same time and is dismayed to find his son Jabba’s murderer, Princess Leia, still alive.  All heck breaks loose at this point, and there is much action with a plot full of twists and turns.

Kile and I both enjoyed this installment in the series.  Although Kile missed Ken (the Jedi prince) being a large part of the story.  Hopefully he will be back in book six, the last book in the series.  I like that it is a fun adventure that keeps Kile and I interested in a new Star Wars story.

My favorite quote:  “I never murdered anyone,” Leia said defiantly. “I’m a diplomat.  I believe on should settle disputes using peaceful negotiations – unless one is attacked and has to defend herself.”