The Search for Delicious by Natalie Babbitt 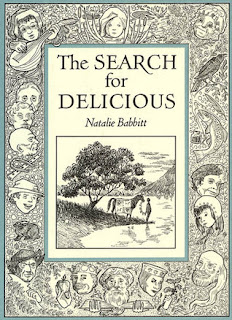 This unique children’s novel starts with a legend of dwarves, woldwellers, and a sad mermaid, which instantly captured my boys’ attention.  After the legend, the story delved into the story of a Prime Minister putting together a dictionary that has an example for each word.  For delicious he has down as an example, “fried fish.”  The King disagrees and it’s soon discovered that no one in the castle agrees on just what delicious means.  The Prime Minister’s young ward Gaylen sets off to poll the Kingdom to find the true meaning of delicious.  The Kings’ brother-in-law Hemlock sets off before Gaylen and sows the seeds of discontent along his path.  For Hemlock may have been waiting for this opportunity his entire life, to find a way to overthrow the King.

The boys and I read this together for their Youth Book club at the library.  They will be discussing this book in one week. We all enjoyed the book.  They didn’t want to read it at first (as it wasn’t Star Wars), but once the novel started, they were very interested in the story.  They liked that the protagonist is a young boy, the fantasy elements, and the eternal question, what is delicious?

Daniel told me that delicious to him is Chili Plus (a family favorite of layered, chili, shredded cheddar, crushed nacho chips, and lettuce) and Kile said delicious to him is chocolate chip pudding cake (another family favorite).  It should be a good book for the kids to discuss at book club, especially just wondering, what is delicious.  In the novel, the citizens are up in arms in particular if their livelihood is tied to a food or beverage.  They would like their food to be what is meant as delicious to help sales.  Luckily, the novel has a great answer for the true meaning of delicious.

Daniel’s favorite part was that he thought it was funny that the General said that beer was what is delicious and that on when they are talking about an example for golden, the General also replies beer.  Kile won’t answer my questions any more about what he likes – is he hitting the preteen years early?

A quote I enjoyed in book is “I’ll go away forever!” he cried to Marrows.  “People are unbearable!  They won’t listen, except to lies, and they fight all of the time and I’ve had enough!”  This is how I feel about our current political climate.

Overall, The Search for Delicious was a wonderful engaging novel that my boys and I all greatly enjoyed.  It makes a great novel for discussion among your family as well as for a book club.

Book Source:  The Kewaunee Public Library
Posted by Laura's Reviews at 8:14:00 AM