The Remains of the Day by Kazuo Ishiguro 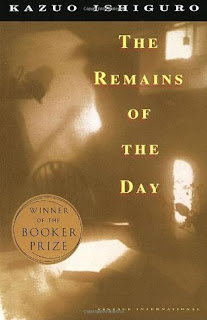 The Remains of the Day is a beautiful novel about an English butler, Stevens, who is at the twilight of his life reflecting on his service to a great lord, his unrequited love for the housekeeper, Miss Kenton, and what his life, dignity, and work have meant.  This novel helped me to move on from Downton Abbey, but also made me wonder, why haven’t I read this book before?  I am reading it now for the Classics Club.  It was published in 1989 so it is a newer classic. I’m calling it a classic as it won The Man Booker Prize for fiction, has been featured on many classics/must read lists, and is now 27 years old. If a car is considered a classic at 25, I think a novel can be as well.

Stevens has worked at Darlington Hall for three decades.  He faithfully served Lord Darlington who had a variety of important visitors and meetings throughout the 1920’s and 1930’s.  Lord Darlington had served in the Great War (WWI) and had befriended one of the enemy.  After the war the two became friends and traveled between England and Germany.  Lord Darlington was scandalized by the treatment of the Germans after WWI and embarked on a campaign to ease the reparations from Germany.  While having a good heart, Lord Darlington was going down a road towards appeasement.

Lord Darlington said:  “I fought that war to preserve justice in this world.  As far as I understood, I wasn’t taking part in a vendetta against the German race.”

If only he would have been able to get some help to the Germans right after WWI, maybe things would have turned out differently.

During this time, Stevens worked with much dignity to help his employer serve a higher cause towards humanity. “History could well be made under this roof, “he told his staff. After a housekeeper and under butler run off together, he hires Miss Kenton as the housekeeper, and his father as the under butler.   Miss Kenton and Stevens clash on many policies at first, but she becomes an invaluable help as his father’s health declines.  Over the years working together, the two develop a rapport, but being reserved professionals, their true feelings are never aired.

I love when Stevens gives his thoughts on the art of being a butler:

“It is my view that our generation has been too preoccupied with the ‘trimmings’; goodness knows how much time and energy has gone into the practicing of accent and command of language, how many hours spent studying encyclopedias and volumes of ‘Test Your Knowledge’, when the time should have been spent mastering the basic fundamentals.”

“And let me now posit this:  ‘dignity’ has to do crucially with a butler’s ability not to abandon the professional being he inhabits.”

“Let us establish this quite clearly:  a butler’s duty is to provide good service.  It is not to meddle in the great affairs of the nation.”

After Lord Darlington’s death, a rich American, Mr. Farraday, has purchased Darlington Hall.  Stevens remains at his post, with a much diminished staff, and tries to maintain his dignity as well as that of Darlington Hall.  After receiving a letter from Miss Kenton and an offer from Mr. Farraday to borrow his Ford car to take a break, Stevens travels to the West Country to tour and to see Miss Kenton again.  The novel is broken up into the days of his trips and the back story is given as remembrances.  Miss Kenton’s letter stated, “The rest of my life stretches out like an emptiness before me, “which has made Stevens take action.

While on his trip, Stevens is mistaken for a great gentleman.  He also is unsure what to do when people hear he worked at Darlington Hall and want to know about Lord Darlington and whether the rumors were true of his involvement with Germans.  Stevens is in a moral quandary.  Was his service really worth it through the years?  Could his life have taken another path?  Did keeping all emotions tied down and the British stiff upper lip allow him to not develop relationships with his father, Miss Kenton, or anyone else?

I really enjoyed this novel.  I loved the structure of Stevens being on a journey with remembrances.  I also loved that as he worked his way through his life on his journey.  Did he regret his life and choices?  I loved the ending, it was perfect.  I also loved how the story was written.  It was slow reading at times, but it seemed to be in Stevens voice, pompous at times, reserved at others, and always full of dignity.  “For it is true, when I stood on that high ledge this morning and viewed the land before me, I distinctly felt that rare, yet unmistakable feeling – the feeling that one is in the presence of greatness.  We call this land of our Great Britain, and there may be those who believe this a somewhat immodest practice.  Yet I would venture that the landscape of our country alone would justify the use of this lofty adjective.”

I loved the very, very reserved romance between Miss Kenton and Stevens.  It is very subtle and I wasn’t for sure I was reading it all right until the very end of the novel.  Stevens has a very high regard for Miss Kenton, and she also did for him as well.  I feel that Stevens put so much of his life towards maintaining his professional dignity that he never let his guard down to feel true feelings.

I also watched the 1993 Merchant Ivory movie for the first time starring Anthony Hopkins and Emma Thompson.  It was a beautiful movie that was a great adaptation of this book.  There were a few changes such as moving the timing of the movie up to start in the 1930’s instead of the 1920’s and having the American that visited the important meeting be the same as the American who bought Darlington Hall after the war.  It was wonderful to see Christopher Reeve in this roll.  I love Merchant Ivory productions, I don’t know how I missed this one!

Overall, The Remains of the Day is a skillfully written novel that like the protagonist, masks great feelings behind dignity and reserve.  It is a great book to get you through the ending of Downton Abbey, but it also is a great book about the meaning of life.  Can one be too busy to really live life?

“One can’t be forever dwelling on what might have been.  One should realize one has as god as most, perhaps better, and be grateful.”

“The evening’s the best part of the day.”

Book Source:  I bought this used from a library book sale at some point in the past 15 years.  I finally have read it!
Posted by Laura's Reviews at 2:20:00 PM