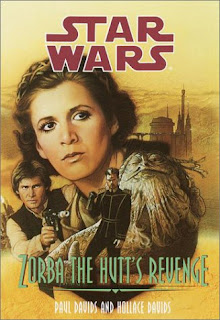 Luke, Ken and their droids travel to Tatooine to attend a droid fest sale to get Han Solo a gift for his new home – a housekeeping droid.  Han has built a floating house in the sky of Cloud City. Jabba’s father, Zorba returns to Tatooine to visit his son only to discover that he has been murdered.  Zorba tries to track down the murderer, Leia, and goes to Cloud City.  Once there he gambles with Lando Calrissian and wins control of Cloud City.  Will Zorba be able to exact his revenge on Princess Leia?

My 10 year old son Kile loves this series of books.  He especially likes the young Jedi prince Ken that was introduced in book #2 and was also in this book.  He loved when Ken flew a car accidentally by himself on Cloud City.  I think Kile relates to him and thinks of him as who he could be in the story.  Kile also liked the new villain, Zorba the Hutt.

I enjoyed that each book seems to have some thoughts on environmental topics.  In this one in particular there are thoughts on the pollution in the air in cloud city and the impact it has on the inhabitants.

Overall, Zorba the Hutt’s Revenge is another entertaining addition to this series of Star Wars books.