So Long, See you Tomorrow by William Maxwell 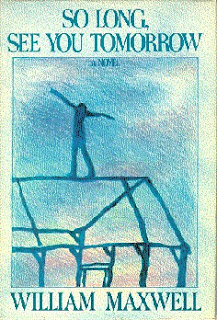 So Long, See you Tomorrow is a brief, beautifully written novel about a murder, the end of childhood, and rural Illinois in the 1920’s.

A young boy (the narrator of the novel) is struggling after his mother’s death following childbirth and the subsequent remarriage of his father.  He befriends another boy, Cletus, as they play on the narrator’s new house that is being built.  After a week of friendship, Cletus disappears after the murder of a tenant farmer in which Cletus’s father is the main suspect.

As an old man, the narrator feels guilt ridden about Cletus and wonders what happened to his friend.  He also imagines the events that could have taken place to cause the murder of Lloyd Wilson by Clarence Smith.  The story that emerges is the raw story of a good man, Wilson, who makes the mistake of falling for his neighbor and friends wife, Fern Smith.  Their love causes the destruction of both families and the ultimately the death of both men.

The language of this novel was beautiful as was the raw emotion.  The narrative set-up of this novel was very unique and worked wonderfully.  I sat down and started this book at the library while my kids played and I found myself immediately caught up in the story.  I felt for all parties involved in the tale, but in particular the children.  The adults were so caught up in their passions that they failed to recognize the havoc that they caused on the lives of their children.  I also was really caught up in the story of Trixie the dog who kept waiting for her boy, Cletus, to return home.  Her story ended in tragedy and strangely echoed the story of my own family dog after my parents’ divorce.

I find myself unable to stop thinking about this story.  It intrigues me and will lead to a good discussion at our FLICKS Book and Movie Club (otherwise known as Rogue Book Club) meeting this May.  So Long, See You Tomorrow is the May selection.  I'm also intrigued that this book is based on a true story and William Maxwell's own childhood in Lincoln Illinois.

I also enjoyed that someone had taken the time to desecrate my library copy of the book.  They had in beautiful handwriting, written notes in the book.  The notes were actually good points and enhanced my enjoyment of the novel.  I didn’t think I would ever say that about someone desecrating a library book.

This book had a lot of wonderful quotes.  Some of my favorite are below.

Opening lines:
“The gravel pit was about a mile east of town, and the size of a small lake, and so deep that boys under sixteen were forbidden by their parents to swim there . . . . One winter morning shortly before daybreak, three men loading gravel there heard what sounded like a pistol shot.”

The narrator on his mother:
“The retouched photograph came between me and the face I remembered, and it got harder and harder to recall my mother as she really was.”

I love this for setting the scene for the bleakness in the country:
“How bleak they were, compared to our house in town.  No big shade trees, no wide front porch to sit on, no neighbors all up and down the street.”

The narrator reflecting on his childhood:
“When I dream about Lincoln it is always the way it was in my childhood... I have been brought to a stop there on the sidewalk by the realization that my mother is inside.  If I ring the doorbell, she will come and let me in.”
Honestly I feel that way whenever I see my Grandparents house.

Overall, So Long, See You Tomorrow is one of the best books I’ve read this year with a great setting, mystery, characters and unique narrative set-up.  It is a hidden gem I had never heard about.  I look forward to the discussion it will provoke at book club.  So Long, See You Tomorrow won the National Book Award in 1982 and was the finalist for the 1981 Pulitzer Prize.  It is a modern classic.