Rilla of Ingleside by L.M. Montgomery 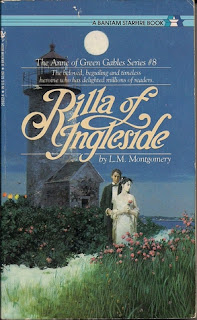 Rilla of Ingleside is the eighth novel of the Anne of Green Gables series.  It is also my favorite besides the first novel, Anne of Green Gables.  I really feel that L.M. Montgomery started and ended this series with a bang.  Just as a warning, I am going to discuss major plot points and deaths in this novel – spoiler alert!

Rilla is the youngest of Gilbert and Anne’s children.  She is fifteen years old, and unlike her five older siblings, she doesn’t seem to have a purpose or drive to her life.  She decides to take a year off before “college” (Queens – which I think is equivalent to high school now).  World War I starts at this time and her oldest brother Jem signs up right away. She has a flirtation with Kenneth Ford, and she promises not to kiss any other man while he is gone during the war.  Does that mean she is engaged?  Rilla’s favorite brother Walter is given a white feather (means coward) when he doesn’t join up right away due to health problems.  He doesn’t want to go to war but goes anyway after being pressured by society into doing so.  And then he tragically dies.  As a teenager reading this book, it was my first look at WWI and Walter’s death shattered me.  I’m still sad about it as a forty-two year old adult.  Rilla’s romance with Ken was also romantic, but my favorite storyline of all is when Rilla adopts and raises a “war baby” whose mother has died, and his father is overseas fighting.  Raising the baby really helps Rilla to grow up and realize what is important in life.

Rilla of Ingleside is different than the rest of the novels in the series as it is set firmly during World War I and talks about real life historical events.  The other novels are vague with timelines and don’t discuss politics or real-life events.  I was interested to find out that this was the first novel written by a Canadian about the civilian war experience.  It is also the only Canadian novel written from a woman’s perspective about WWI by a contemporary.  I have also read Willa Cather’s Pulitzer Prize winning novel on WWI, One of Our Own.  I prefer Rilla of Ingleside.  I think having read through the entire series, seeing the changes it makes on the characters and their world makes more of an impact on the reader.

I also like how this novel was told through Rilla’s point of view and that we got to see Anne and Gilbert as parents.  If you look back at my review of Rainbow Valley, I was not happy that the point of view and story shifted to the Meredith children rather than the Blythes.

The book still has plenty of Montgomery’s traditional humor, mostly at housekeeper Susan’s expense.  I love the scene where Kenneth Ford has come to talk to Rilla and Susan decides to help Rilla entertain by telling embarrassing stories about them both when they were children.  Or when Whiskers on the Moon proposes to her and she chases him out of the house.  I still laugh thinking about it.

Montgomery also writes great animals.  This book had Dog Monday, a great faithful dog that waits four years at the railroad station for his boy Jem to return.  And he somehow knows when Walter is killed and lets out a great howl through the night. I love this quote about Dog Monday, “He knew that not all dogs could be handsome or eloquent or victorious, but that every dog could love.” There is also a cat Dr.-Jekyll-and-Mr.-Hyde who had an everchanging personality.

Montgomery also does an excellent job of discussing grief in this novel.  The novel is dedicated to Frederica Campbell Macfarlane, L.M. Montgomery’s best friend who died during the 1918-19 flu pandemic.  The pandemic is not discussed in this novel, but grief through the loss of loved ones is discussed.  I thought the discussions were frank and truthful.  I also thought it was interesting how people would judge Rilla for not grieving “enough” for her brother.  Who gives people the right to judge?  What is the right amount of grief?  Another character is harassed for grieving “too much” for her fiancé.  It was interested to ponder.

Overall, Rilla of Ingleside is one of L.M. Montgomery’s finest novels.  I feel like she really finished the Anne series up in a grand fashion.  I only wish this book would have been made into a movie at some point.  I’m still waiting for everyone to stop making fifty versions of Anne of Green Gables and to actually film the entire book series.  What do you think?
Posted by Laura's Reviews at 7:04:00 PM