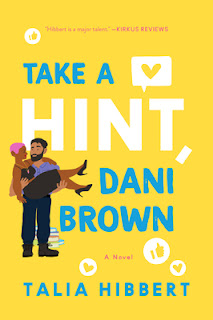 Danika “Dani” Brown is career focused as an instructor working towards her PhD and doesn’t want to deal with all that comes with a committed relationship.  She flirts over morning coffee with security guard Zafir Ansari.  Zafir is the opposite of Dani and wants to have a long-term committed relationship with someone.  After losing both his father and brother in an accident, Zafir has worked through his depression and anxiety and is helping youth learn how to deal with their emotions and play Rugby through his charity.

After Zafir rescues Dani when she is trapped in an elevator during a fire alarm, a student takes a video of the rescue and it’s soon trending on Instagram as #DrRugbae.  Zafir’s charity starts to gain followers and funding, and he wonders if the two of them can “fake” a relationship to keep the trend going.  As the fake relationship moves forward, will the two with their mutual attraction, but differences, move forward with a real relationship?

I enjoyed how this novel talked through the issues that both main characters had but embraced their differences.  Zafir has anxiety and depression and he is open and honest about it.  I also loved that he really enjoyed romance novels and knowing that they would have a happy ending.  Dani had commitment problems stemming from a failed past relationship.  By the end of the novel, she had to realize that it wasn’t true love if the person didn’t love her for herself.  Dani loved her research and would get pulled into her work.  That doesn’t mean she was unlovable.

This book is very steamy and has explicit language.  Dani tells it as she sees it and is often crass in her talking and imaginings.

Favorite Quotes:
“Pain was private.  Some things weren’t for public consumption.  There were lines.”

“But coping takes a lot out of a person, too.  And handling things doesn’t ever mean never struggling or slipping up.  Life isn’t that black and white, not even close.”

Overall, Take a Hint, Dani Brown was an enjoyable romance with characters that had real issues, but embraced their differences and individuality.  I loved it and need to read the first book in the series!