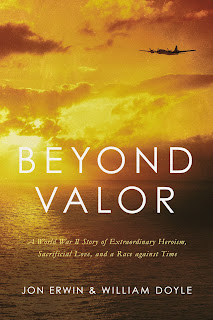 Beyond Valor is the extraordinary story of a World War II hero, Red Ewin, who put himself in harms way to save the lives of everyone on his B-29.  Told by his grandson Jon Erwin, Beyond Valor tells the story of Red and how he became a Medal of Honor recipient.  When a phosphorus flare malfunctions and shoots back into their B-29, Red is immediately badly injured.  He still finds the strength to carry the flaming bomb while on fire 30 feet to throw it out the window and save everyone on his plane.  His faith had him immediately pray for God’s help and through the guidance of God, he was able to make his heroic rescue.  As he lay afterwards on what was thought to be his death bed, the new President Truman awarded him the Medal of Honor.  There were none available in the area and they wanted to get one to him before he died.  Another crew flew to Hawaii, smashed open a display case to take a Medal of Honor to get it back in time.

I loved Red’s faith, his love for her wife Betty, and his family.  I love that Betty stuck by his side after his horrific injuries and years of surgery afterwards.  I also loved that before the war, Red was a hard worker that had to take care of his mother and siblings after his father’s untimely death. He also found the time to be a youth minister at his church.  After the war, he continued to live a good life and tried to help as many people as he could.  He felt he had to live up to being a Medal of Honor recipient.

Beyond Valor also digs into the history and tells a fascinating story with details.  I learned so many new things about B-29s, the firebombing of Tokyo, the start of Harry Truman’s Presidency, the Medal of Honor, the treatment of veterans, and much, much more.  I loved that it took a look into the ethics of war on both sides of the conflict.  Curtis May had some deep thoughts saying, “Killing Japanese didn’t bother me much at the time.  I suppose if I had lost the war, I would have been tried as a war criminal.  Luckily I was on the winning side.” He admitted to thinking of the horrific things that were happening in Japan, but he observed that to “in order to do your job and keep your sanity, you had to banish such thoughts from your brain.”  It was really interesting to think about.

This was a very human story.  I loved that it started by Jon Erwin being at his grandfather’s funeral and wondering what exactly he had done to get such a send off and what exactly being a Medal of Honor winner entailed.  He took a deep dive into history to figure it out and really learn about his grandfather.

I have loved reading about World War II in both non-fiction and fiction since I was a kid, and I’ve especially loved the airplanes from the war.  I personally thought this was a very fascinating true story.

“Many Medal of Honor recipients have gone on to live lives of great distinction and fulfillment, but others have been burdened by the recognition . . . some embrace the role of Medal of Honor recipient, spending their lives speaking to civic groups, raising money for charities, and hobnobbing with movie stars, politicians, and professional athletes.  Others resent having their private grief turned into public display.”

“You know, looking back on that, I think, no, that took an extraordinary amount of willpower to do that, and I don’t know whether I would have been able to do it.  He didn’t just save twelve people, he saved generations of people.” – Navigator Pershing Youngkin

“The true measure of a hero is really not necessarily the gallantry of his action, but essentially how he lives out the rest of his life after all of the attention and glory have faded away.”

“Red often explained how the intervention of God made it possible and that’s the only explanation that makes sense to me.”

“There are only about seventy Medal of Honor recipients who are alive today.  My fear is that your generation is losing sight of what the Medal of Honor means and why it matters.  You should tell them that story.  Tell them the idea of doing more than is required of you is part of the American ethos, and it is exemplified in the Medal of Honor.  It’s part of what makes us Americans.  You don’t have to be a soldier and on the field of battle to go above and beyond the call of duty.”

“So, the best thing to do is always make the best of what you have. Life is what you make it.  Life is beautiful.”

Overall, Beyond Valor is a fascinating non-fiction story of a great man, how he impacted history, and how faith brought him through it all.

Book Source:  Review Copy from Thomas Nelson for being on the TLC Book Tour.  For more stops on this tour, check out this link.

Giveaway:  Check out my Instagram for a giveaway of this book: https://www.instagram.com/laurasreviews_1/

From the Publisher:
On April 12, 1945, a fleet of American B-29 bombers flew toward Japan. Their mission was simple: stop World War II by burning the cities, factories, and military bases of the Japanese em­pire, thereby forcing an unconditional surren­der. Yet the mission did not go as planned. On board one of the B-29s, the City of Los Angeles, a phosphorus bomb detonated inside the plane. Staff Sergeant Henry E. “Red” Erwin absorbed the blast of burning phosphorus yet managed to throw overboard the still-flaming bomb, be­fore collapsing from the third-degree burns over much of his body.

Breaking protocol, the plane diverted to a military hospital at Iwo Jima. President Truman quickly ordered that Erwin be awarded the Medal of Honor, the highest honor of the American military, before the young airman died of his wounds. There was just one problem: no Medals of Honor were available in the entire Pacific theater. General Curtis LeMay dispatched a squad of airmen on a 1,000-mile mission to smash their way into a display case and steal a medal to give to Erwin before time ran out.

Meanwhile, Red’s courageous young bride set out on her own mission, one of against-all-odds healing. Her success would determine the fate of the twenty-three-year-old warrior–and years later make possible the birth of the book’s author: their grandson, Jon Erwin.

Drawn from in-depth interviews with eyewitnesses and deep archival research, Beyond Valor is an extraordinary tale of bravery, heroism, faith, and devotion.