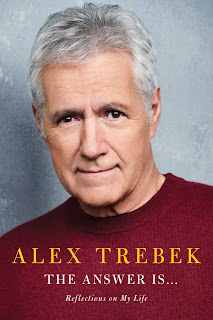 Title:  The Answer Is:  Reflections on my Life

Source: Review Copy from Simon & Schuster Audio.  Thank-you!  I had some problems downloading the book and also purchased a copy from Audible.

The Answer Is:  Reflections on my Life is a poignant memoir.  Alex Trebek, the legendary host of Jeopardy, contemplates his life and his end of life.  Trebek started this memoir after he was diagnosed with stage 4 pancreatic cancer.   It is filled with vignettes from his entire life. The book is timely as he reflects on the COVID crisis and also the bitter partisanship that the country has fallen into.  He ends the memoir thinking about how he would like to die peacefully in his favorite swing with his beloved wife by his side.  If this doesn’t make you tear up, I don’t know what would!

Alex Trebek has been a mainstay of my life.  I remember being a child in the 1980’s in particular at my Great Grandparents house watching Jeopardy each night.  He was a classy and funny gameshow host that became an icon.  My kids mostly know of him through the various parodies such as Weird Al.  Trebek discusses the parodies, the making of the show, and some of his all-time favorite moments.  I was intrigued on how Trebek grew up in Canada in a dysfunctional family and how he first got into radio and then TV as the only bi-lingual host.  It was very interesting.  I also liked how he discussed that he was the right person at the right time, he was gifted at hosting television game shows and they were hot at that time.  Throughout his vignettes he came across as a very nice guy.  He discusses the love story with his wife as well.  It was also interesting as he discussed a wide range of topics including his iconic mustache, cars, and philanthropy.  I love how he frankly discussed cancer, and as an environmental engineer I enjoyed his thoughts on climate change as well.

I listened to this on audiobook and it was a very enjoyable experience.  Part of what I loved the most was the Trebek narrated chapters himself, such as the introduction, the last chapter, and other chapters that were meaningful such as the love story with his wife.  The other narrator was the “greatest” jeopardy player, Ken Jennings.  I loved the transitions that were included in the audiobook as they handed the narration back and forth.  I also loved how the chapter titles were in the form of a question.  This was not an in-depth study of Trebek, but I learned a lot about him and his philosophy on a lot of things.  It was a emotional look too as he contemplates his end of life.   He also was humorous as well and I had many laugh out loud moments listening to this audiobook.

“I don't like to use the words batting or fighting when talking about cancer. It suggests that there are only two outcomes: winning and losing. If you don't get well, then you are a "loser." If you have decided to stop treatment, you are "giving up." That's nonsense.... It is not a fair fight. Not even close. It is simple biology. You get treatment and you get better. Or you don't. And neither outcome is an indication of your strength as a person.”

“Even if you are learning facts that you are not going to be able to use in your daily life, it enriches you – the fact itself just enriches you as a human being and broadens your outlook on life and makes you a more understanding and better person.”

Overall, The Answer Is:  Reflections on My Life is a timely, poignant audiobook filled with great vignettes on the life and thoughts of Alex Trebek.  I greatly enjoyed it.