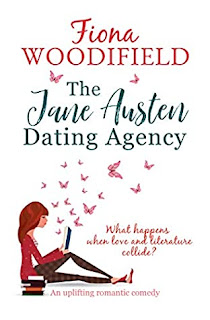 Sophie Johnson is working for a high-powered fashion magazine in London in sales.  She would much rather be writing editorials for the magazine.  She has been unfortunate in love, but when she discovers the Jane Austen Dating Agency, she thinks her dreams have been answered.  It’s described as an “Exclusive dating agency for ladies to meet real gentleman in beautiful settings – only the truly romantic may apply!  Dine like Elizabeth and Darcy at Chatsworth aka Pemberley, picnic like Emma or Knightley on juicy strawberries and sparkling champagne on Box Hill.”

Sophie is soon meeting new people and having new adventures through the dating agency.  Will she find her own Mr. Darcy, or will it be Mr. Wickham?

This was the March Book Club selection for JASNA Northwoods Book Club.  We had our meeting yesterday and it seemed that everyone felt the same about this novel as I did.  It was a fun book, but there were just too many characters.  The author tried to put in characters and plot items from four of Austen’s novels and it was just too much.  It was hard to keep track of the characters and I don’t feel the romance was well developed between the leads.  I wish the author would have written a separate book for each Austen novel with less characters – it would have been fun.

“My brother, Ben, always says I have such unrealistic expectations of men due to an alarming overconsumption of romantic novels as a teenager.  Maybe he’s right, I know I love to escape into a book – I should probably at least try to live in the real world.  But right now it feels pretty inadequate.”

“I want him to gaze at me, although maybe not in a creepy stalker way, and not controlling either.  Just romantic – you know what I mean.”

“I really admire you.  In spite of your ridiculous gaucheness our bizarre friends and ability to burst out laughing at random moments, I think maybe . . . well, I really like you.  You’re not like anyone else I’ve ever met.”

“The time has come for me, Sophie Johnson, to kick ass and sort out my own happy ever after.”

Overall, The Jane Austen Dating Agency was a fun book, but lost its way with too many characters.

Book Source:  Purchased on my Kindle from Amazon.com