Caste: The Origin of our Discontents by Isabel Wilkerson 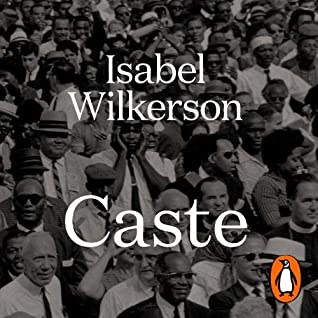 Title:  Caste: The Origin of our Discontents

Source: Checked out on Overdrive from the Kewaunee Public Library.  Thank-you!

Our country has been going through a powerful racial reckoning during this past year.  Caste:  The Origins of our Discontent by Isabel Wilkerson theorizes that much of our current day problems are because of an unspoken caste system or hierarchy that is used in America.  She compares the caste systems of America, India, and Nazi Germany in this book.  Wilkerson shows the power of the caste system through a deep dive into history and into personal stories including her own.  She also talks about the future and how to make changes for the good including not just being anti-racist yourself but speaking up when you hear someone making racist comments.

I found this book to be eye opening and vastly discomforting at times, but it made me really think about my own biases.   I found it to be very informative and it made a lot of sense for the state of our country now.  I was shocked to learn that the Nazis based their treatment of Jewish people on how America treated African Americans.  My one compliant is that I wish there would have been more explanation of the Indian caste system.  I’m still slightly puzzled by that system.  The book is very current ending last year when it was published during the COVID crisis.  It does not shirk away from talking about politics the last five years.

Robin Miles was the narrator of this audiobook and I thought of her as the voice of the author.  Her voice was engaging, and I couldn’t stop listening to this audiobook.

“Caste is structure. Caste is ranking. Caste is the boundaries that reinforce the fixed assignments based upon what people look like. Caste is a living, breathing entity.”

“Evil asks little of the dominant caste other than to sit back and do nothing. All that it needs from bystanders is their silent complicity in the evil committed on their behalf, though a caste system will protect, and perhaps even reward, those who deign to join in the terror.”

“So the real question would be,' he said finally, 'if people were given the choice between democracy and whiteness, how many would choose whiteness?'”

Overall, Caste by Isabel Wilkerson is a book that every American should read.