Bridgerton: The Duke and I by Julia Quinn 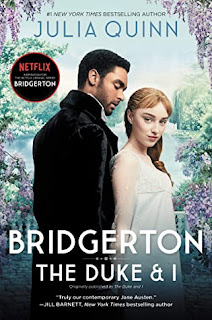 Bridgerton fever has hit America.  I am a lover of Regency romance, but I somehow missed this series when it was first published.  I watched the new Netflix series and I loved it.  I was excited to be able to read and review the first book in the Bridgerton series, The Duke and I.  The first season of the new show is based on this book.

Daphne Bridgerton is the fourth of eight children and has been unable to find a husband after nearly two seasons in London. Everyone considers her their friend rather than wife material.  After a run in with Simon Basset the Duke of Hastings, her eldest brother’s friend, the two decide to feign a relationship in order to gain suitors for Daphne and fend off ambitious mothers from Simon.  Will the two fall in love?  Why does Simon never want to marry and have children?

I love the fake relationship turned real trope.  Quinn’s writing made this a fun escapism novel to read.  I loved the banter between Daphne and Simon. I really enjoyed Lady Whistledown’s statements at the start of each chapter.  She is my favorite and I enjoy the mystery of who she is.

Comparing the novel to the show, I thought the show did an excellent job bringing the story to screen. There were some slight differences with the book, particularly towards the end of the novel.  The series really developed many of the secondary characters that we don’t get to see to much of in the novel.  I look forward to both watching season 2 and reading more of this series.

I also enjoyed the second epilogue in the book which is set twenty years in the future.  It may be spoiled future books for me, but I really enjoyed seeing how things were going down the road for our main characters.

SPOILER ALERT:  I’ve read a lot of outrage over a particular scene in the novel.  I think it’s interesting that the outrage has focused on consent for Simon but leaves out of the conversation that Simon has been pulling the wool over Daphne’s eyes during their entire marriage as well.  They are both in the wrong and I thought that was part of what the story was about.  I thought it sparks a good conversation on consent. SPOILER END.

Overall, Bridgerton:  The Duke and I is a fun escapism regency romance.