News of the World by Paulette Giles 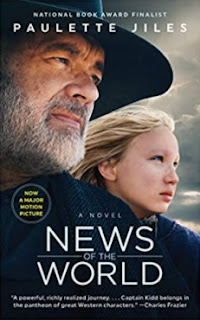 Captain Jefferson Kyle Kidd undertakes a 400-mile journey to deliver Johanna, a child kidnapped by Kiowa raiders, back to her relatives near San Antonio.  Reconstruction Texas is a dangerous place after the Civil War.  Settlers are constantly at war with the Kiowa and Comanche as they take over the native territory.  Settlers are also at war with themselves over politics.  Captain Kidd must take Johanna through this dangerous territory on an epic journey.  Johanna only speaks the Kiowa language and does not understand why she has been separated from her Kiowa family.  Captain Kidd must build a relationship with her and help her to learn English.  He also must earn money along the way.  He lost his printing press and money with Confederate bonds at the end of the war and now earns his living reading the newspapers from the East to audiences in each town that he stops by.  He doesn’t read local news as it can become too heated.  Will Captain Kidd and Johanna make it safely back to San Antonio?

It took me a bit to get into this book with the almost stream of consciousness narrative and lack of punctuation.  Once I got into the story, I couldn’t put it down.  Captain Jefferson Kyle Kidd is a wonderful character, a compassionate honorable man with an interesting history of his own.  I felt for Johanna as well and loved her progression as a character.  Contrasting Captain Kidd and Johanna with the world that they inhabited made me very nervous for the both of them.  This book ended perfectly.  It was a great story.

Have you watched the movie yet?  I’m still waiting to watch it.  I would like to buy it rather than rent it.  We did just watch the Searchers with John Wayne this past weekend.  It is a beautiful movie but has a lot of troubling racism in it.  It did make me wonder though about children that were kidnapped by Native American tribes and what happened to them overall.  Would they be accepted and be able to adapt back to their old lives?  How would they be treated?  The note at the end of News of the World makes me believe it was not a happy ever after for them.  It also made me wonder about the reverse scenario, Native American children that were taken from their families and assimilated into pioneer culture.  How did they fair in the long run?

I had read Simon the Fiddler last spring and I was happy to see him and Doris as minor characters in this novel.  It even concluded with what would happen with them in the future.  It was like getting to visit with old friends again.

“This was how the Captain knew that the things of the imagination were often as real as those you laid your hand upon.”

“If people had true knowledge of the world perhaps, they would not take up arms and so perhaps he could be an aggregator of information from distant places and then the world would be a more peaceful place.”

“Men had lost the ability to discuss any political event in Texas in a reasonable manner.  There is no debate, only force.”

“Some people were born unsupplied with a human conscience and those people needed killing.”