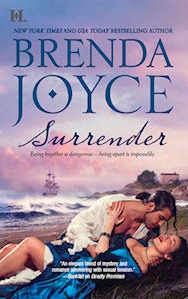 Do you ever participate in a white elephant gift exchange? Our book club does a white elephant exchange of books at Christmas.  This year with not meeting in person, my friend Wendy sent us all a romance she had picked up in a garage sale.  Each of us is reading our romance novel for the February book club pick and are going to give a summary.  We also have to read the most outrageous quote or love scene.

I know I was supposed to be laughing at my book . . . but I found that I was enthralled with mine and loved the plot.  Evelyn D’Orsay is a young widow.  Her much older husband, herself, and daughter had to flee France during the French Revolution.  They were helped by Jack Greystone, a notorious smugger.  Evelyn and her family settle in Cornwall.  Four years later, her husband has passed, and she discovers their finances are in awry.  Right before his death, he told Evelyn of gold he had buried on their estate that could set Evelyn and their daughter Aimee up for the rest of their lives.  Evelyn is not sure how to retrieve the gold in war torn France.  She remembers the smuggler who helped her to escape France in the first place and she sets out to find him.  Will Evelyn find Jack and the treasure?

Surrender is another case of don’t judge the book by the cover.  The cover makes you believe that you are going to read a very steamy romance.  The book actually is much more of a clean romance.  The hero and heroine did have sex, but it is behind closed doors and not described in the book.  To be honest, that is the type of romance that I prefer.  My only problem is that I now don’t have any outrageous quotes or love scenes to share with my book club!

I enjoy historical romances and I in particular love this time period (1790’s) during the French Revolution.  The book was also mostly set in Cornwall and also included a great deal of smuggling.  I love the books Poldark by Winston Graham and Jamaica Inn by Daphne Du Maurier which also cover this topic. This book was in the same vein.  Evelyn is a strong heroine and Jack is a dashing hero.  They are both beautiful people and described as such, but also are smart and caring.  They have great chemistry.  The novel had a great plot that really engaged me.  I liked the intrigue with spies between France and England.

I learned this is the third book in The Spymaster’s Men series.  I read this as a stand alone and it was good. I didn’t feel like I was missing any pieces.

My only negative on this novel is that I thought the ending was rushed.

Overall, Surrender is an engaging historical romance with a great plot.