The Kindest Lie by Nancy Johnson 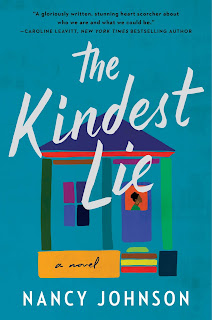 I kept seeing The Kindest Lie on Instagram and saw that it was about an African American female engineer.  Readers of this blog know that I am always looking for books about engineers.  It’s hard enough to find engineers as the protagonist, let alone a female African American engineer!

Once I started reading this book, I couldn’t put it down.  The story was very engaging.  Ruth Tuttle is at a high in life.  She has graduated from Yale and is a successful chemical engineer working in downtown Chicago.  She has married Xavier, a man that she loves and who is successful in his own right.  It is 2008 and Barack Obama has just won the presidency.  It seems that anything is possible for them.  Xavier wants to start a family, but all Ruth can think about is the secret she has been keeping from him.  She had a baby when she was 17 and gave it up for adoption.  She decides now is the time to finally return to the Indiana industrial town, Ganton, to confront her past.  What happened to the baby she gave up for adoption?  What will happen to Ruth and Xavier’s relationship?

The story is told is alternating chapters.  The other main point of view is an eleven-year-old boy nick named “Midnight.”  Midnight is an eleven-year-old boy that is growing up in Ganton.  His mother died giving birth to his sister and his father is struggling after the main factory that employed most of the town has closed down.  Midnight is shuffled between his grandma and father and feels wanted nowhere.  He hangs out with kids of color and gets his nickname from those saying he wants to be black – and because he is pasty white.  Will Midnight be sent away by his Grandma?  Will he find his place in the world?

This story was riveting.  I really liked how both Ruth and Midnight were searching for their own identities and their place in the world.  I enjoyed that Ruth was a professional woman engineer and the exploration of the pitfalls that come with it.  Ruth’s voyage and her struggle to make it out of Ganton and to a professional career were heart rending.  The setting, a midwestern town struggling with unemployment and racial identity was both familiar and intriguing.  I grew up in a small Michigan town that also struggled with unemployment but was more rather a whitewashed town. I know what’s it’s like to struggle and be the first person in your family to go to college.  I don’t know what it’s like to be an African American in America trying to make that same struggle.  There are many more hurdles in the way.    This novel was thought provoking and covered so many hard topics such as race, poverty and social class, losing your sense of self when you lose your job, motherhood, being a woman in a male dominated field, grandparents raising grandchildren, etc.  I greatly enjoyed it.

“No one talked about what happened in the summer of 1997 in the house where Ruth Tuttle had grown up.”  - What a great first line!

“If the titles of doctor and lawyer had signaled success back in the day, then engineer had to be the 2.0 symbol that you made it.”  - I might be biased as an engineer, but I like this.

“Still, all that old school planning had served Ruth well in chemical engineering, where being a woman was almost as much an anomaly as her Blackness.”

“No matter how hard he tried, he couldn’t forgive her.  To him death was just another way people broke their promises.  A way for them to leave and have the last word.”

“One thing I learned a long time ago is that you can’t live your life looking back.”

“There was no fairness scale that could right the wrongs from childhood.”

“Sometimes leaving is the best way.  The only way.”

Overall, The Kindest Lie is one of the best books I’ve read for a while.  I look forward to continuing to read new works from debut author Nancy Johnson.  Johnson has the gift to put together a riveting story with real characters that cover a lot of truths of life.