The Yellow Wife by Sadeqa Johnson 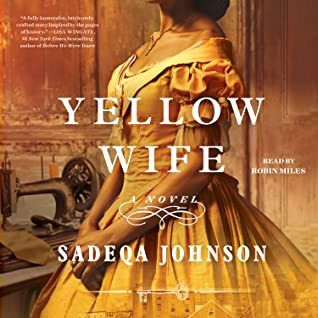 The Yellow Wife is a historical fiction novel that swept me away into the story.  The main character, Pheby Delores Brown is an admirable strong woman fictional heroine.

Pheby has grown up relatively sheltered on a plantation. Born in 1832 to a mulatto mother and the planation owner, she was taught to read and play the piano by Miss Sally, her father’s sister.  After his marriage and Miss Sally’s death, things take a turn for the worse for Pheby and her mother.  Her mistress hates her and tries to make her life difficult.  Things come to a head when her mistress sells her after her father is involved in a carriage accident.

Pheby finds herself at the notorious Devil’s Half Acre, a jail for African American slaves in Richmond, Virginia.  Slaves are brought to this jail to be punished and to be sold.  It’s an area of great suffering.  Pheby is selected by the cruel owner of the jail to become his “yellow wife.”  How will Pheby survive?

Pheby’s story was engrossing and terrifying.  I have been reading a lot of World War II fiction the last few years and her story reminded me of concentration camp survivors.  Terrible choices had to be made to survive.  People were treated as they never should be treated.  The immorality and cruelty of slavery was on full display in this novel.  I can’t imagine a world where a man lives with his wife but sleeps with his slaves and has children with them as well.  This man owns his own children.  A man that owns his “yellow wife” and loves her but can treat her with great cruelty.  It was a strange world that still has consequences today.

The story is told from Pheby’s point of view and she is a great character. I loved Pheby’s love for her children.  I loved that she was survivor and trying to figure out how to not only make it herself, but for her children to have the best life possible.

Pheby also had a tragic romance story.  She grew up with and loved Essex Henry.  She became pregnant with his child right before she was sold.  He had to run north for his own horrific reasons.  They are reunited in the future, and Pheby has to make a hard choice that is the best for all she holds dear.  It makes me sad just thinking about it and all of the people who were unable to stay together with their loved ones.

Sadeqa Johnson had a great note at the end which gave the details of the real history of the Devil’s Half Acre and of the real woman who Pheby is based upon.  It was riveting history that I had never heard about.

Robin Miles was a great narrator of this audiobook and was Pheby Delores Brown to me.

Overall, The Yellow Wife is an engrossing historical fiction novel that shows the hard choices that were made to survive the world of slavery.