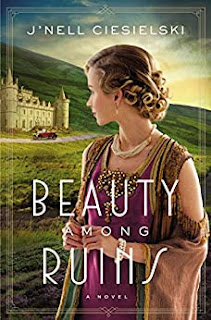 Do you love Downton Abbey? In particular, Season Two when the Abbey was turned into a convalescence hospital for World War I soldiers?  Are you looking for an independent heroine to rival Lady Sybil?  Beauty Among Ruins is the book for you!

Lily Durham is a young American heiress who does not follow the rules.  Her family sends her to England to improve her ways.  After World War I starts, Lily stays in England and joins her cousin in Scotland to work in a grand old estate, Kinclavoch Castle, that has fallen on hard times.  It has been turned into a convalescence home for the wounded and the family lives in one old wing.  While her cousin Bertie is a nurse, Lily failed the exams and works as an aide.  She also fails to follow directions and soon befriends the owner, Alec and his sickly sister Viola.

Alec’s fortunes have fallen on hard times after having to pay a death tax after his father’s death.  He is trying to keep his estate in good standing by selling off his prized positions and paintings.  Even worse, a newspaper man is hounding him to sell the estate.  Alec meets the plucky American aide and even though he is on one hand annoyed by her vivacity, he also admires it.  After a soldier is kidnapped, the two work together to try to find the culprit.

I greatly enjoyed this engaging story.  I loved the setting and the time period.  A convalescence home during World War I is a time period that I find very intriguing.  I thought it was especially interesting when the soldiers told their stories of what it was like on the front lines.   I also loved Alec and Lily’s relationship.  They had almost an Elizabeth and Darcy relationship with Alec being a grumpy man who said what he thinks, which is not always the polite thing to say.  Lily was very enjoyable with a great zest for life that is just the brightness that Alec needed in his life.  I also enjoyed Viola’s story which had hints of The Secret Garden.

It was great fun when Lily invited her friend Ethel Barrymore to perform for the soldiers.  I love old Hollywood/theatre history and it was fantastic to have Barrymore as a character in this story.

The mysteries were interesting, but it was fairly obvious who the culprit was.  I far more enjoyed the characters, history, and romance.

“Pride had many layers.  And she had trampled on more than one of them since arriving.”

“There was a time when men acted in honor and not in the interest of their bank accounts – when integrity was prized above all.  Those days are long gone.”

Overall, Beauty Among Ruins is an intriguing World War I romance with a slight mystery involved.  I especially recommend it for fans of Downton Abbey.

Book Source:  Review Copy from Thomas Nelson for being a part of the TLC Book Tour. Thank-you!  Please check out this link for more stops on the tour.

In Ciesielski’s latest sweeping romance, an American heiress finds herself in Scotland amid the fallout of the Great War, and a wounded Scottish laird comes face-to-face with his past and a woman he never could have expected.

American socialite Lily Durham is known for enjoying one moment to the next, with little regard for the consequences of her actions. But just as she is banished overseas to England as a “cure” for her frivolous ways, the Great War breaks out and wreaks havoc. She joins her cousin in nursing the wounded at a convalescent home deep in the wilds of Scotland at a crumbling castle where its laird is less than welcoming.