Out of the Storm by B.J. Daniels 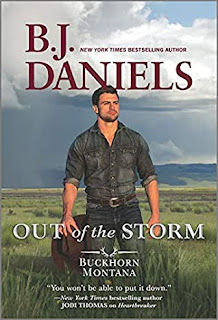 As a young bride and mother, Kate Jackson, experienced a devastating loss when her husband Daniel was lost in a refinery explosion.  Twenty years have passed by, but Kate has continued to look for her husband everywhere, convinced that he is still alive.  Her daughters grown, she has finally allowed herself to love again and has gotten engaged to her boyfriend Collin.  He takes her on an engagement trip to Montana so that she can see snow for the first time and make a snow angel.  While on their trip, Kate runs into a mysterious man, Jon Harper, and she is convinced he is Daniel.  Jon insists he is not, but what is his mysterious past?

I don’t want to say more and ruin the plot of this one.  Out of the Storm is a great suspense novel and page turner.  I had a hard time putting it down as it was a very engaging story.  I liked that the characters were three dimensional, in particular the villain.

I read Out of the Storm as part of the Brenda Novak 2021 Reading Challenge.  As part of the book group, Brenda Novak interviewed author B.J. Daniels about this book and asked readers’ questions from the Facebook page.  You can still watch this meeting on Brenda Novak’s Book Group Facebook page.  It was fun and interesting.  My favorite thing I learned is that author B.J. Daniels based this story on her aunt lost her husband in an oil refinery accident and spent the rest of her life looking for him.  I thought that was fascinating.  I look forward to future group reads in this book group.

Overall, Out of the Storm is a great romantic suspense novel.