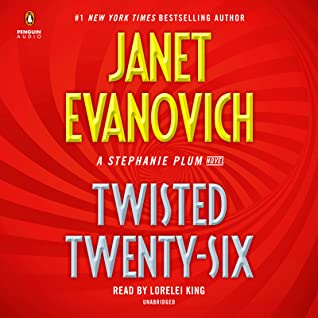 When I need a fun book pick me up, I look no further than the Stephanie Plum series by Janet Evanovich.  I have enjoyed this series on audiobook the past few years as I LOVE the narrator. Lorelei King is my favorite audiobook narrator, and she brings this series to an entirely new level.   She has a different unique voice for each character and just makes the entire audiobook a joy to listen to.

Stephanie Plum is a bounty hunter and is not sure about her job and the predicaments it gets her into.  In Twisted Twenty-Six, the job gets more personal when someone appears to be out to get Stephanie’s Grandma Mazer.  Grandma has become a widow again after her groom of 45 minutes, Jimmy Rossolli, dies of a heart attack.  Jimmy was a local mobster and was the keeper of the keys for the goods for his group of mobsters.  No one knows where he puts the keys and are sure that Grandma has the answers.  Will Stephanie and Grandma be able to find the keys while Stephanie also works with her partner Lula to track down her bounties?

I love how this book was self-aware.  Stephanie reflects on what she would look like if she were fifty-six years old and is disturbed.  I think that would be her age is she aged along with the series.  She also reflects on how she never changes and is stuck in the same rut.  This made me laugh a lot as that has been my complaint the last few novels!  I like that Janet Evanovich took my and other readers complaints and made them into a point of humor in this novel.

Overall, Twisted Twenty-Six is a funny novel that is a perfect audiobook when you need a pick me up!