Winter in Paradise by Elin Hilderbrand 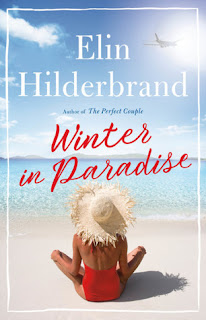 Have you every traveled to the Caribbean?  If so, what island?  I have sadly never been there, but I love to read about it.

Winter in Paradise was another book that I read through quite quickly.  It was the January pick for the Kewaunee Library Book club.  I haven’t been able to go to that book club for over a year since switching jobs, but with working from home and a virtual book club format, I was able to spend a delightful lunch hour with everyone this past week.

Irene Steele is shocked to learn that her husband Russell has been killed in an accident while he was away on a business trip.  She is even more shocked to learn that he has a 15-million-dollar mansion on the island of St. John and a mistress.  How could a former corn syrup salesman from Iowa end up in such a situation?  Irene and her sons, Baker and Cash, take off for St. John to learn more about what happened to Russell and to collect his ashes.  The trip opens up more questions that it answers.  It also makes them realize that Russell’s mistress, Rosie, was a real person with many people who loved her.  How did Russell and Rosie end up together?  What exactly did Russell do for a living with his new job?

Unfortunately, I didn’t realize this was a trilogy and the novel ends with a cliffhanger and no answers to my questions.  Luckily the next two novels have been published and I have put a hold on the second one at the library.  I thought the story line was intriguing in this book and I couldn’t put it down.  I like most of the characters, but Irene’s sons Baker and Cash both annoyed me.  The general consensus of book club was that they liked this novel.  We all liked the story line and I think were all indignant about a husband that could keep such a secret from his wife.

“It’s newly astonishing to Irene that as much as we know about the world, we still can’t see into another person’s mind or heart.”

“It’s not necessarily the creature comforts themselves, it’s that someone thinks you deserve them.”

“Secrets become lies and lies end up destroying you and everyone you care about.”

“They were taught in school that fear often derives from ignorance.  Once you understand a situation, it becomes far less intimidating.”

Overall, Winter is Paradise has an intriguing storyline, but beware, it is the first book in a trilogy, and you need to read all three books to resolve the storyline.