Happiness Becomes You: A Guide to Changing Your Life for Good by Tina Turner 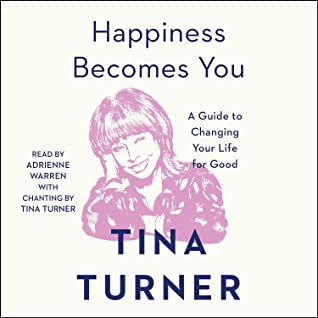 Title:  Happiness Becomes You:  A Guide to Changing Your Life

Read by:  Adrienne Warren with chanting by Tina Turner

I have enjoyed Tina Turner’s music my entire life and was very happy to review her new book.

Tina Turner was born Anna Mae Bullock in Tennessee.  She had a hard upbringing with first her mother and then her father abandoning her to be brought up by grandparents and other family members.  She met Ike Turner while still a teenager and became a star, but behind the scenes she was living on the edge with constant abuse from Ike.  She had been raised an indifferent Baptist, and it wasn’t until the 1970’s that she discovered Buddhism.  She started to chant and pray every day and learn more about the religion.  It brought her inner peace although she has still had trials and tribulations due to her health and the suicide of her son.

Happiness Becomes You is Tina’s story as she explains her Buddhist beliefs and how they helped her to change “poison to medicine.”  She explains how the reader can use these ideas for finding happiness in their own lives.

I found this audiobook to be very inspirational.  Turner has experienced a lot in her life, but she was able to find her inner peace and move forward.  I love that she shared this experience with the world through her book.  Adrienne Warren narrated the audiobook and did a fine job.  I will admit though, that I especially loved getting to hear Turner’s voice as she chanted at the end of the audiobook.  It was beautiful.  I didn’t know that much about Buddhism and thought it was very interesting to learn more about it.

I love that each chapter started with a list of inspiration quotes from a wide array of people including such figures as Maya Angelou and Pope Francis.  I also enjoyed the afterword which had statements from a variety of people talking about how much Tina Turner meant to them.

Overall, Happiness Becomes You is a timely book that gives insight into Tina Turner’s life, but also insight on how we call all work on achieving happiness in our own lives.