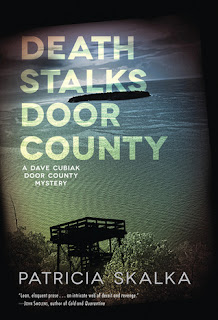 Death Stalks Door County was the February pick for the Page Turner’s Book Club at the Kewaunee Public Library.  We had our meeting today at lunch to discuss this book.  We live in Kewaunee County, which is the county south of Door County Wisconsin, where this book takes place.  This is the first book in a series of mysteries featuring detective Dave Cubiak.

Dave Cubiak’s life has fallen apart.  After the death of his wife and daughter, he needs change and a new direction.  He takes a job as an assistant director at Peninsula State Park in Door County.  After a series of murders takes place, Dave is racing against time to find the murderer.  Who has murdered six seemingly random people in and around Peninsula State Park and why?

I enjoyed reading about the places I’m familiar with in this story.  Cubiak himself was not a very likeable character, but after a while, he started to thaw, and I started to enjoy reading about him more.  I was engaged with the story and wanted to know who the murderer was, but I found the plot to be rather convoluted and unrealistic.  There were a lot of characters in this novel and most were not well developed.  I also was annoyed as the implication in this novel is that you need to have some big city experience to really know what’s going on.  The local sheriff is bumbling and has to be saved by Dave Cubiak the former Chicago detective. The local coroner goes out of his way to make sure Cubiak knows he once lived in the big city but came back to Door County.   Living in an area where we do get a lot of tourists from the big city, I know this is how some people from the city feel, that we are all bumbling hicks, but it was annoying to have that bias so prominent in the book.  Also having grown up in Michigan, the fact that author tries to say Wisconsin is a mitten shape at the start of the book bothered me.  It’s not!

“Dutch showed me pictures of them as kids.  Two beautiful little girls on an old tire swing.  Then to end up like that.  How sad the underpinnings of people’s lives.”

“Cubiak was beginning to realize that beneath the peninsula’s picturesque veneer, streams of animosity rippled fast and deep.”

Overall, Death Stalks Door County had an interesting setting, but the story fell flat with too many one-dimensional characters and a convoluted plot.